PLANXTY BURKE ("Pleraca Buaircac" or "Plangstae Bhuaircidh"). Irish, Air or Planxty (6/8 time, "animated"). G Dorian. Standard tuning (fiddle). ABC (O'Neill): AABBCC (Complete Collection): AA'BB'CC (O'Sullivan/Bunting). The melody, for which there are no words, was composed by the blind Irish harper Turlough O'Carolan, probably in honor of Thomas Burke of Castlebar, County Mayo, whom O'Sullivan (1983) finds once represented the Borough of Castlebar in King James's Irish Parliament of 1689. O'Carolan also wrote another tune for the personage. The Burke family of Glinsk was of Norman extraction who had 'modern' aspirations, according to Gearóid Ó hAllmhuráin (1998). "Planxty Burke" was popular enough to have been included in several collections through the 18th century, including Neale's Celebrated Irish Tunes (c. 1726, p. 21, Neale's Collection of Carolan Tunes (post 1743, p. 10), Lee's Favourite Collection (c. 1780, p. 27), Thompson's Hibernian Muse (c. 1786, p. 63), and Mulholland's Ancient Irish Airs (1810, p. 79, where it appears under the title "Planxty McDermot"). O'Neill's version is copied from Buntings, concludes O'Sullivan.

The air was played by harper Rose Mooney at the first Granard Harp Competition in 1781, a performance which earned her the third prize of five guineas (she also won third prize there in 1782 and 1785). Rose was an unfortunate soul, blind, led by a girl named whom harper Arthur O’Neill (1734-1818) excoriated in his memoirs. Remembering the third Granard harp competition (in which she came in third) harper O’Neill said:

But I forgot to mention that before the Ball opened Rose Mooney pledged (pawned) her harp, her petticoat and her cloak. When I make this remark of poor Rose, the faults or ludicrous remarks I make use of respecting her own conduct should be entirely attributed to her maid Mary, whose uncommon desire for drinking was unlimited, and taking advantage of her mistress’s blindness she always when money was wanting pawned any article on which she could raise half a pint. Therefore, poor Rose, I acquit you of any meanness on your own account, as your guides and mine have led us into hobbles which we poor blind harpers have to get out of and afterwards laugh at. But we in general think that it’s better for people in every situation in life to have about them the rogue then know than the rogue they don’t know.

Mooney died during the Rising of 1798, not due to hostilities but due to the fact that she and Mary happened to be in the village where the French troops landed in support of the Irish rebels. Caught up in the grand exuberance amongst the native population, she celebrated a bit too much and died a few days later. 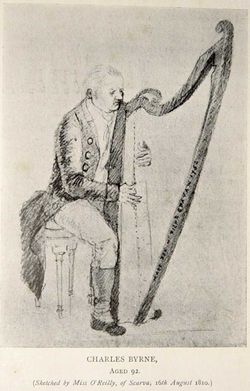 Source for notated version: appearing in his 1840 collection, it was noted by the Irish collector Edward Bunting from Charles Byrne the harper in 1802. O'Neill (Krassen), 1976; p. 236.