Back to Playhouse Squabble (The)[edit]

PLAYHOUSE SQUABBLE, THE. English, Country Dance Tune (cut time). G Major. Standard tuning (fiddle). AABB. The melody is unique to Charles and Samuel Thompson’s Compleat Collection, vol. 3 (London, 1773). Dance instructions appear in the Thompson’s Twenty-Four Country Dances for the Year 1769 (p. 54). The title refers to disputes between the patentees of Covent-Garden Theatre, London, in 1768, chiefly between Rutherford and Thomas Harris [1] on one side and George Colman [2], supported by Powell, on the other. There were several consequences and circumstances, with numerous accusations that sound quite petty now, but were hotly contested at the time. According to one account, they arose from the attempt made by Harris to insert his mistress, Mrs. Lessingham, into parts she could not play. Legal proceedings were taken and harmony was not restored until Harris quarreled with Mrs. Lessingham. However the disputes were much more complex than that, for Harris and Rutherford claimed the right to be associated with the management of the theater with Colman, who resisted the incursion into the "dramatic and theatrical province." The four proprietors met regularly for a time to try to iron out differences, but the meetings became increasingly contentious. In January, 1768, the private dispute went public via a pamphlet published by Harris and Rutheford stating their grievances, which led to a pamphlet war between the two camps that became increasingly abusive. In the summer of 1768 there was an attempt by Colman to physically lock out his adversaries by causing the stage doors and windows to be barricaded with timbers, with Colman ensconced inside. By September Rutherford had wearied of the affair and sold his shares (making a small profit). Powell died suddenly in 1769. The dispute between Harris and Colman continued in the courts, but Colman was left effectively in command. Eventually the two men came to some working agreement, and Harris himself, in ill health and mourning the death of his wife, sold his shares in 1774.

Harris's dalliance with Mrs. Lessingham [3] (born Jane Hemet around 1734) was not a particularly long one, although she produced three children for him. They parted in 1771, prompting someone to write anonymously (signing the correspondence as "Tell-Tale") to the editor of the General Evening Post in August, 1771: 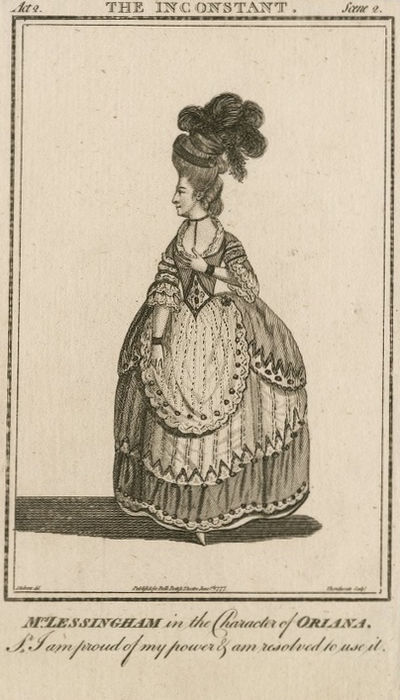 Since the misfortunes and indiscretions of the fair sex seem to engross more particularly the attention of the world, than any other topic, I must beg leave, for the entertainment of your readers, to acquaint them with the enlargement of Mrs. L____m – who, to the unspeakable distress of Mr. H___, has eloped to some corner of the earth, with a new paramour, utterly unknown to the afflicted Menelaus. This Helen of an actress very young married to Capt. S___, of the navy – she left him for Delaval; Delaval for Boscawen; Boscawen for Pembroke; Pembroke for Colbourne; Colbourne for Mason; and Mason for H___; and alas! H___ for whom neither he nor I know. By all these she has had sweet children – Is it not a pity, that so fruitful a mother has not a consideration from Government, who has made so much food for gunpowder! Mr H___, poor gentleman, is all in the fuds upon this melancholy elopement. Could he stimulate the theatric Grecians, as the injuries of Menelaus of yore did, we might be entertained with the siege of some old castle surrounded with a moat, and defended by rooks, where this delectable run-away is supposed to be immured.

Back to Playhouse Squabble (The)[edit]