Back to Plundering the Lowlands[edit]

PLUNDERING THE LOWLANDS. AKA and see "Spraith of the Lowlands now Graze in the Glens (The)," "Plunder of the Lowlands now Graze in the Glens," "Crodh laoigh nam bodach" (Old Man’s Calf (The)). Scottish, Slow Air (3/4 time). A Dorian. Standard tuning (fiddle). AB. This tune "preserves the memorial of one of those predatory excursions which the Highlanders were in the habit of making to carry off the cattle of the neighboring low countries; considered, from the ignorance of the times, rather commendable as an act of prowess, than reprehensible as an act of aggression. He believes the air peculiar to his native country south of Loch Ness" (Fraser). See also note for “Crodh laoigh nam bodach” for more on this tune, for, despite Fraser's rather warlike version, seems to have been well-known as a simple crofting community cattle-driving song, sung when taking livestock to greener pastures. 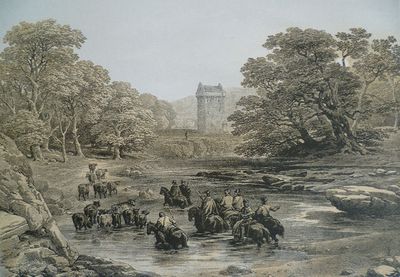 Border reivers at Gilnockie Tower, from an original drawing by G. Cattermole

Back to Plundering the Lowlands[edit]