Find traditional instrumental music
This is the stable version, checked on 10 November 2019.
Jump to: navigation, search

Back to Poor Johnny's gone to War

POOR JOHNNY'S GONE TO (THE) WAR. AKA and see "Tommy Love," "John Lover('s Gone]]," "John's Lover is Gone," "John the Lover." American, Song and Reel. USA; southwestern Va, western North Carolina. D Major. AABBCC ('C' part added by Malcolm Owen). This southwestern Virginia song/tune has currency under several closely related title variants. Galax, southwest Virginia, fiddler Emmett Lundy [1] (1864-1953) recorded "Poor Little Johnny's gone to the War" for Alan Lomax, Joseph Liss and Jerry Weisner in August, 1941. accompanied by his sons Kelly on guitar and vocals and Geedy on banjo. Emmett Lundy [2] (1864-1953) had a mentor by the name of Greenberry Leonard, of Oldtown, near the Lundy homestead, who was an elderly man when Lundy was learning the fiddle and from whom he obtained many of his tunes. Through Lundy, the Grayson County, Va., fiddle tradition can be traced to the first half of the 19th century. 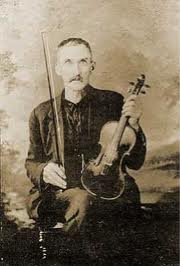 The tune was in the repertory of southwestern Virginia fiddlers Luther Davis, Kahle Brewer and Taylor Kimble under this title, and, also as “Poor Little Johnny Has Gone to the War,” from Bertie Mae Dickins of Ennice, North Carolina. Eric Olson, Malcolm Owen, and Tom Thompson made a field recording of Laurel Fork, Virginia, musician Stella Kimball (with Taylor Kimball, fiddle, and Ivey Kimball, guitar) playing "Poor Johnny's gone..." in October, 1968 (AFS 14,146), as did Tom Carter & Blanton Owen in 1973 (AFS 18, 638).

According to one (probably apocryphal) source, the melody goes back to the time of Confederate cavalryman General Jeb Stuart during the Civil War (Kinney Rorrer). Stuart was known to have had a banjo player in among his attendants.

Back to Poor Johnny's gone to War