Find traditional instrumental music
This is the stable version, checked on 15 October 2021.
Jump to: navigation, search

Back to Poor Little Mary Sitting in the Corner

POOR LITTLE MARY, SITTING IN THE CORNER. American, Reel (cut time). USA, Mississippi. A Major. AEae tuning (fiddle). AA'B. Tom Rankin (1985) could find no recorded or printed versions of this tune, which sounded to him like a children's game song "with its narrow melodic framework in the coarse phrase." Enos Canoy (1909-1970, Simpson County, Miss.), the source, learned the tune from his uncles and mentors, Love Kennedy and Robert Runnels of Simpson County, Mississippi. On the 1939 field recording (by Herbert Halpert) a friend and fellow Simpson County fiddler, Jim Myers, beat two straw on Enoy's fiddle while he played. 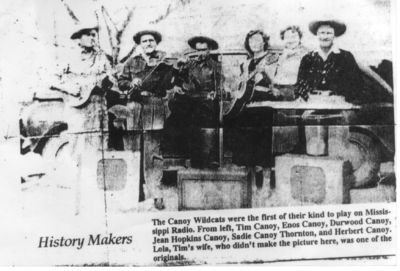 A later version of the Canoy family band. 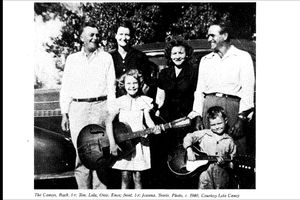 Enos Canoy and his family band c. 1940 (liner notes, "Great Big Yam Potatoes", 1985).
Several times in the course of the tune Canoy sings the single line "Poor little Mary sitting the corner" in the 5th and 6th measures of the first strain, just prior to the second strain of the tune. If there was a second line to what might have once been a couplet, it was not sung be the fiddler, but the placement at the end of the first strain does not leave room for more.

Back to Poor Little Mary Sitting in the Corner