Back to Poor Old Robinson Crusoe[edit]

POOR OLD ROBINSON CRUSOE. AKA and see "Poor Old Soldier," "Old Soldier (1) (The)," "Rogue's March (1) (The)." American, Dance and Song Tune (6/8 time). E Major. Standard tuning (fiddle). AB. Once a song air but the melody is now better-known as "The Rogue's March," which has, since 1750, been the regulation drumming-out tune for offenders from the British army. It was imported to the Americas for the same use. "Poor Old Robinson Crusoe" has also had substantial longevity as a children's song and nursery rhyme:

Poor old Robinson Crusoe was lost,
On an island they say, O,
He stole him a coat from an old billy-goat,
I don't see how he could do so.


A song, "Robinson Crusoe," used the same melody but had different words. It was printed in The Juvenile Miscellany; or, Friend of Youth (Boston, 1834) which purported to be a work of 'Christian literature for children'. The first two stanzas of that song went: 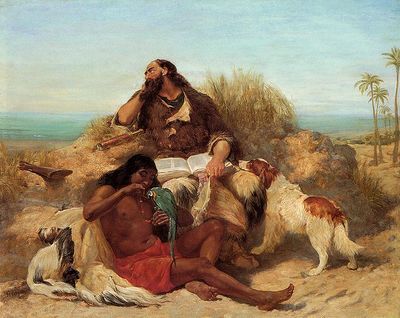 Robinson Crusoe and His Man Friday, by John Charles Dollman

Back to Poor Old Robinson Crusoe[edit]