POPLAR POLE. Old-Time, Breakdown. USA, southwestern Va. D Major. ADae or Standard tuning (fiddle). A tune and tune title peculiar to the Franklin/Floyd County area of southwestern Va. (Tom Carter & Blanton Owen, 1976). It was also in the repertoire of Glen Lyn, Giles County, Virginia, fiddler Henry Reed (1884-1968), although he learned it in Floyd County when he was working there. Alan Jabbour [1] says it is "essentially the same tune as" "Handsome Molly" as recorded in the 78RPM era by Grayson and Whitter (Gennett 6034, Victor 21189). He also sees similarities in "Angeline the Baker." Related song melodies, continues Jabbour, were collected by Cecil Sharp in the early 20th century as "The Derby Ram" (Sevier County, Tenn.) and "Liza Anne" (Lee County, Kentucky) and can be found in Sharp's English Folk Songs from the Southern Mountains. Finally, Jabbour notes the tune was used for shape note hymns "The Converted Thief (Original Sacred Harp, Denson Revision, p. 44) and "The Church's Desolation" (ibid, p. 89).

The meaning of the title is unknown, although poplar poles were used for flagpoles and for haystacks on rural farms. This passage is from a recollection of farming near the Little Kanawha River Basin, West Virginia: 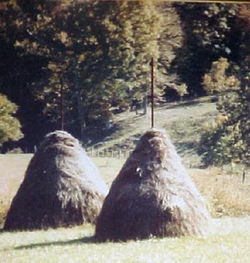 ...the first step in the making of a haystack was to set the center pole. A center pole was usually a fifteen foot tall poplar pole cut in the woods. This pole would be set about three feet into the ground and was braced by four braces which would be nailed into the center pole. When the center pole was firmly set, a floor of old fence posts or boards would be laid on the ground around the pole to keep the hay off the ground. A haystack was then ready to be built. John advised that “flakes” or sheaves of grass were laid in a circle about five feet from the pole. An overlapping circle on the inside, snug to the pole, was then laid on the outside circle. The overlapping of the circles was important to keep the hay from slipping out of the stack This routine was continued until the stacked hay was high enough off the ground that one person known as the “pitcher,” would work on the ground and one worker called the “stacker,” would work on the stack. [2]