Back to Portabello Hornpipe

PORTABELLO HORNPIPE. AKA - "Portabellow Hornpipe," "Portobello." English, Hornpipe. G Major. Standard tuning (fiddle). AB: AABB. The tune appears in the music manuscript collections of fiddlers William Irwin (c. 1850, Langdale, near Wigton, Lake District, Cumbria) and Joseph Barnes (1762, Carlisle, Cumbria). Irwin titled it "Portobellow Hornpipe" in his MS. The name honors the English naval victory at the Battle of Porto Bello [1] (1739) against Spain during the War of Jenkin’s Ear (1739-1748), when Admiral Edward Vernon captured the Spanish town (now known as Portobelo in the modern-day Panama), an import harbor port on the Spanish Main. The victory was a sensation in England, and in 1740 when Vernon returned to London, he was feted with a dinner in his honor at which the song “God Save the King” was performed in public for the first time. 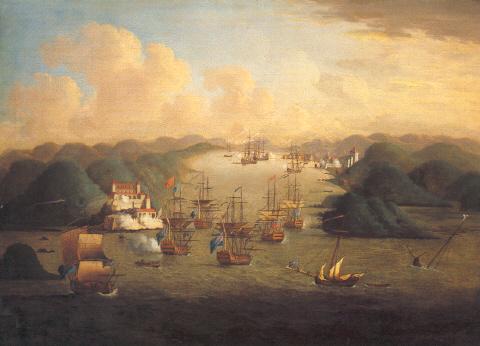 The Battle of Porto Bello
As a consequence of Vernon's much-heralded victory, there are numerous place-names in Britain, Ireland and even North America with the name 'Portobello'.

Nick Barber remarks the tune was popularized by the Cock and Bull Band in modern times.

See also listing at :
Hear the tune played on whistle by David Spaulding Sharp on youtube.com [2]

Back to Portabello Hornpipe