Possum's Tail is Bare (The)

Back to Possum's Tail is Bare (The)

POSSUM’S TAIL IS BARE, THE. American, Reel and Song. D Major. Standard tuning (fiddle). AABB. This version of the tune is most often sourced to Braxton County, West Virginia, fiddler Melvin Wine (1909-2003), albeit from field recordings and personal tutelage, as he never recorded the tune on his commercially released issues. There is a general resemblance (as with a number of old-time tunes) to the prototypical "Bile Them Cabbage Down" and perhaps a cognate relationship. Despite the fact that most modern versions have been highly influenced by Wine's singing and playing, the tune appears to have been in circulation among West Virginia musicians prior to him; however, specific citations are wanting.

Verses sung to this tune are numerous, and many are "floating" (i.e. appearing in other songs), including songs in both black an white folk repertory, and in minstrel repertory. They include: 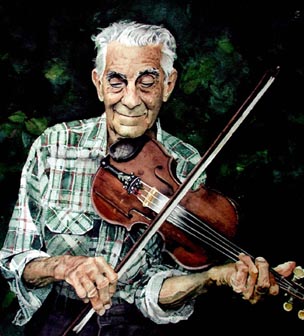 Squirrel’s got a bushy tail, rabbit’s got the hair,
The old coon’s tail has rings all around, but the possum’s tail is bare.

Take an old possum by the tail, then we’ll skin him on a rail,
Never ever more will he be seen, grinning at the moon.

African-American collector Thomas Talley printed the following similar verses in dialect in his Negro Folk Rhymes: wise and otherwise (1922) under the title "Tails No. 7":

Back to Possum's Tail is Bare (The)