POST HORN GALOP. Scottish, English; Galop (2/4 time). G Major ('A' part) & D Major ('B' part). Standard tuning (fiddle). AABB. It was customary for the mail stage-coach to sound a 'post horn' [1], a type of coiled trumpet just prior to their arrival at a way-station, to announce the mail. 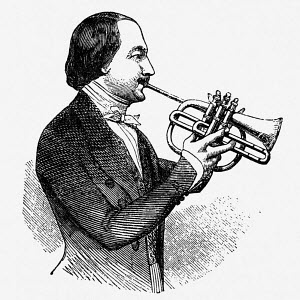 The galop was a fashionable mid-18ty century dance that was, for a time, popular as the final dance of the evening (much as the waltz is today). The "Post Horn Galop," a popular novelty piece that actually uses a short English post horn in its performance, was composed by Herman Koenig, a German-born cornet virtuoso (who also played the violin). The piece was premiered in 1844 at the winter promenade concerts at Covent Garden by Koenig himself. Koenig had moved to England in the first half of the 19th century and played coronet in the Drury Lane Orchestra, London, establishing himself as a musician of merit and a soloist. However, he was also interested in developing brass instruments and partnered for a few years with the instrument dealer Pask to form the Pask & Koenig company, while he developed some of his ideas for improving horns. He toured the United States in the company of French composer and conductor Louis Jullien and returned to the Continent in 1854 with Julien, where he continued to refine his instrument-making. Koenig himself is said to have been of the opinion that a cornet could rival the human voice, if it was “skillfully played and similarly treated”.

An oft-repeated assertion is that Koenig's "Post Horn Galop," his most memorable composition, remains a signal that the dancing at a hunt ball or wedding reception is ended, but this remains to be substantiated.


See also listing at:
See/hear the piece played by brass band on youtube.com [2]