POSTMAN'S KNOCK [1]. English, Morris Dance Tune (6/8 time). D Major. Standard tuning (fiddle). AB. Collected from the village of Adderbury, Oxfordshire, England by Janet Blunt who noted it from the last of the old dancers, William Walton, in 1917. The following bit of verse was sung at the beginning of the dance:

Every morning as true as the clock
Someone hears the postman's knock. ... (x2)


The Adderbury morris tradition has a number of songs collected from it, for the morris team at the turn of the 19th century was also a singing club. The couplet above comes from a much longer song called "The Postman's Knock" dating to the 1880's. Quoting from Mudcat.org [1]: "S.J. Adair Fitz-gerald writes in his book Stories of Famous Songs vol. 1, c. 1901, pp. 227ff:"

A SIMPLE, homely song that is rarely heard now-a-days, for its novelty has long worn off, is " The Postman's Knock," written by L. M. Thornton, and composed by W. T. Wrighton, of drawing-room ballad composing and singing celebrity. "The Postman's Knock," when it was first published, about forty years ago, spread into favour at once, and was sung all over Eng-land, because it appeared at a period when the " New Penny Post" of Rowland Hill had had time to become understanded of the people and to be utilized by them. And because it appealed to the sympathies of the majority, it remained quite a favourite in some parts of the country for more than twenty years. The words were written by a humble individual of small literary ability, who died in the Bath Workhouse, May 8th, 1888, after a hard fight against poverty. It must be confessed at once there is no art whatever in the irregular stanzas of the song, but there is plenty of human nature of a kind: 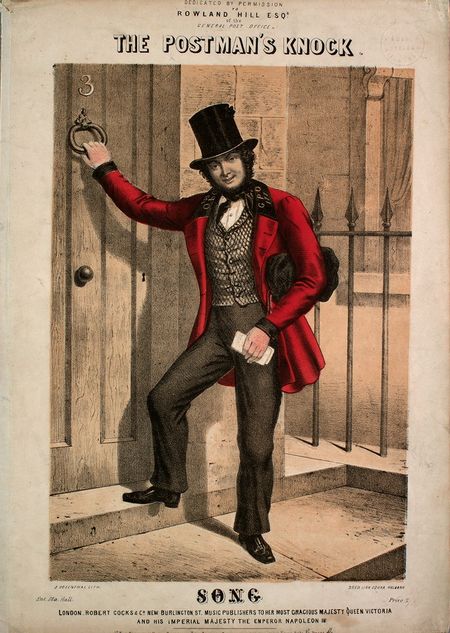 What a wonderful man the postman is,
As he hastens from door to door!
What a medley of news his hands contain,
For high, low, rich, and poor!
In many a face he joy doth trace,
In as many he gnefs can see,
As the door is ope'd to his loud rat-tat,
And his quick delivery.
Every morn, as true as the clock,
Somebody hears the postman's knock.


See also listing at:
See/hear the dance performed on youtube.com [2] [3]
Read the entry for "Postman's Knock" at Mainly Norfolk [4]