Find traditional instrumental music
This is the stable version, checked on 25 May 2021.
Jump to: navigation, search

Back to Poule (La)

POULE, LA. AKA – "Brunswick Quadrille," "Poole (La)." English, Quadrille (6/8 time). D Major ('A' and 'B' parts) & B Minor ('C' part). Standard tuning (fiddle). AABC. “La Poule” (the hen) is a portion of a many-part dance for four couples called a quadrille. The entire dance consists of five parts and was extremely popular on the Continent prior to and during the Napoleonic era, reaching England by 1808. It was introduced to Regency society by the Duke of Devonshire and became fashionable by 1813; some few years later it was being danced regularly at dances throughout the country. 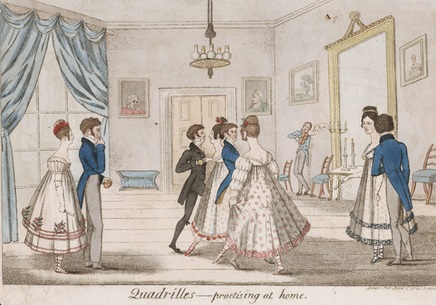 "La Poole" or "La Poule" formed part of a standard quadrille set, as promulgated by the first English dancing master to popularize the Continental import, Edward Payne. The “La Poule” figure is always the third figure of the quadrille, generally in ABACABA form and always in 6/8 time; there are various tunes used for “La Poule,” although the structure and time signatures tend to remain the same. Payne's First Set of Quadrilles were published in the middle of the second decade of the 19th century, the separate figures being named: "Le pantalon; L'ete; La Poulle; La Trénise (or “La Pastourelle” (shepherdess)); Finale." There were other quadrille sets (Payne himself introduced ten sets before his death in 1819), with various other-named figures substituting for Payne's original ones, or with new figures altogether, but Payne's first set remained the one most recognizable. The "La Poole/Poule/Poulle" melody was entered into several musicians' manuscripts, including those of John Moore (c. 1837-1840, Shropshire), C.J. Fox (1829-33, Beverley, East Yorkshire), William Clarke (Feltwell, East Anglia, c. 1850), and Philadelphia (Pa.) African-American musician Frank Johnson (1820, p. 23). Burks’ “La Poule” appeared in America in John Carr’s The First Book of Cotillions (1801) and William William’s New and Complete Preceptor for the Fife (Utica, 1826). It also appears in the music copybook of Frank Johnson, a free black American musician living and concertizing in Philadelphia, Pa., who wrote out his manuscript and presented it to Mrs. A. Rush, around the year 1820. The same melody was copied into the manuscript of musician William Tildesley of Swinton, Lancashire, in the 1860’s (No. 73), where it is a third part simply labelled “Quadrils.” See other English musicians' manuscript versions under the spelling "Poole (La)."

Back to Poule (La)