POWDERHAM CASTLE. English, Jig. D Major. Standard tuning (fiddle). AABB. This stately manor is the historic home of the Earl of Devon, and the dwelling of the Courtney family for over 600 years. It is located in an ancient and extensive deer park in Exeter, southern England, along the River Exe. Construction of Powderham Castle was started around 1390 by Sir Philip Courtenay, ancestor of the present Earl of Devon. It was extensively damaged by the Parliamentarians during the English Civil War and considerable restoration and alteration followed in the 18th and 19th centuries. 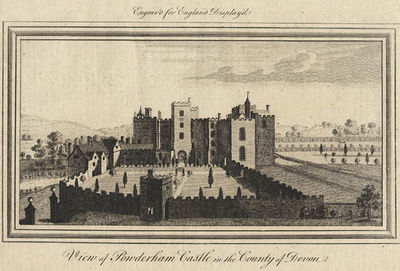 Two 18th century printings of the identical tune can be found under different titles: the Thompson's printed it as "Burlesque (The)" while Straight and Skillern gave it the title "Monmouth Assembly." Perhaps there is a west England association, as Devon and Monmouth both abut the Bristol Channel, albeit on the other side from one another.