Powers of Punch (The)

Back to Powers of Punch (The)[edit]

POWERS OF PUNCH, THE (Cumacta na dig). Irish, Double Jig. G Major. Standard tuning (fiddle). AABBCCDD. The word 'punch' derives from a Hindi word, panch, meaning ‘five’, because of its five ingredients: spirits, water, lemon-juice, sugar and spices. The word was first recorded in English in 1669. The drink, according to liquor historian David Wondrich, became popular with British seamen who sailed into the tropics. A sailor's beer ration was ten pints per day, and was a staple of the shipboard company, but the warm temperatures caused the beer to spoil. Punch had more staying power in those climes however, and became a prized substitute. "They made it with local ingredients in India and Indonesia in the early 1600s," Wondrich tells NPR's Linda Wertheimer. "They were 13,000 miles away from any source of English beer or wine, and they had nothing to drink. And English sailors ... respond very poorly to that" [1]. 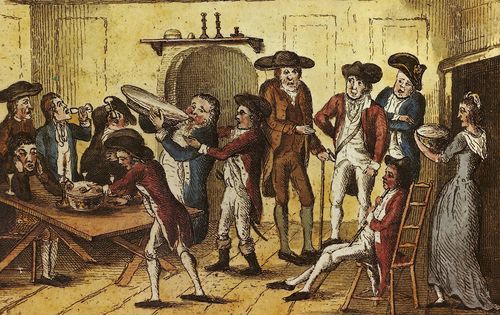 
See also listing at:
Hear the tune played at the Comhaltas Archive by the Longridge Céilí Band [2][3] and by Merain on youtube.com [4]

Back to Powers of Punch (The)[edit]