PRAIRIE REEL. Canadian, Reel. D Major. Standard tuning (fiddle). AA’BB’. Composed by Manitoba fiddle great Andy DeJarlis, who recorded the tune around 1959. It was also popularized by the playing of Canadian radio and TV fiddler Don Messer with his band The Islanders. 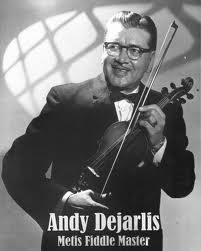