Back to Pretty Betty's Reel[edit]

PRETTY BETTY'S REEL. AKA – “Betty Brown’s Reel,” "Pretty Betty," "Pretty Betty Brown," “Pretty Brown’s Reel.” Canadian, Reel. D Major. Standard tuning (fiddle). AA'BB. Composed by Ontario fiddler Ward Allen, who won contest after contest in the 1950’s and who carved out a career for himself as a radio fiddler. This tune is related to the "Off to California (1)" family of tunes. 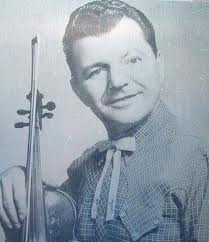 Back to Pretty Betty's Reel[edit]