Back to Prince Adolphus' Fancy

PRINCE ADOLPHUS' FANCY. English, Country Dance & Reel (cut time). D Major. Standard tuning (fiddle). AABB. Prince Adophus [1] (1774-1850) was the tenth child and seventh son of George III and Queen Charlotte, and Duke of Cambridge from 1801. At the time this reel was first published, the young Duke was in the court of Prussia to perfect his knowledge of military tactics, and was appointed colonel in the Hanoverian army. He fought in Flanders in 1793, where he was wounded and captured temporarily by the French. After serving for a short time as a volunteer with the British forces before Dunkirk, he arrived in England in September, 1794, towards the close of which he was appointed colonel of the Hanoverian guards. Adophus served in the campaign of 1794-5 as colonel and major-general in General Walmoden's corps, in Hanoverian service. 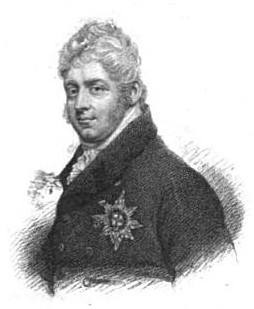 He was a popular prince, but not universally admired. One woman who visited him in Hanover when he was a young man thought he was "extremely handsome, tall and finely formed with fair complexion and regular features, charming manners and a flow of amusing conversation." Caroline, Princess of Wales, remarking on him somewhat later was less enamored: “The Duke of Cambridge looks like a sergeant, and so vulgar with his ears full of powder." Queen Victoria did not get along well with Adolphus, her uncle. The Duke's public popularity benefited from the fact that his life (unlike so many of his family) was scandal-free, and that he lived within his means.

"Prince Adolphus Fancy" was aptly named, for he was a skilled amateur violinist and was fond of music. In later years, he was apt to join in impromptu at musical parties, either singing or on his violin.

Back to Prince Adolphus' Fancy