Back to Prince Alfred's Hornpipe[edit]

PRINCE ALFRED'S HORNPIPE. Scottish, English; Hornpipe (cut time). E Major. Standard tuning (fiddle). AABB. The title references either one of two Prince Alfred's, father and son. Prince Alfred (1844–1900), Duke of Edinburgh, second son of Queen Victoria married Marie Alexandrovna, Grand Duchess of Russia. Their son, Prince Alfred (1874-1899), Victoria's grandson, was raised from the age of eight under a strict regime in Germany in preparation for inheriting the Duchy of Coburg. He became a lieutenant in the 1st Regiment Prussian Guards, but was discharged in 1898 on the grounds of ill-health, and died, aged twenty-four, in 1899. 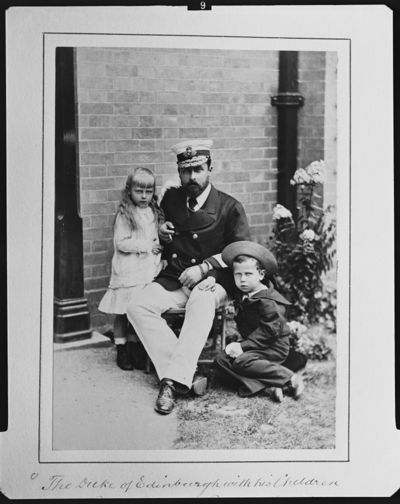 Prince Alfred, Duke of Edinburgh, in 1881, with his children Princess Marie and Prince Alfred.

Back to Prince Alfred's Hornpipe[edit]