Back to Prince of Wales's Birthday (1)[edit]

PRINCE OF WALES'S BIRTHDAY [1]. English, Country Dance Tune (2/4 time). G Major. Standard tuning (fiddle). AABB. The melody was first published in London by John Walsh in his Second Book of the Compleat Country Dancing Master, 3rd edition, 1735 (republished in a later edition of 1749). It was also published by John Johnson in A Choice Collection of 200 Favourite Country Dances, vol. 3 (London, 1744), and was entered into the 1790 music copybook of London musician Thomas Hammersley.

At the time the tune was first published (1735) the Prince of Wales was Hanover-born Frederick Louis (1707-1751), the eldest but estranged son of King George II and Caroline of Ansbach, as well as the father of King George III. Fredrick Louis was the heir apparent to the British throne from 1727 until his death. Fredericksburg, Virginia, was named in his honor, but Frederick himself was "a high-spirited youth fond of drinking, gambling and women." He predeceased his father, and upon the latter's death on 25 October 1760, the throne passed to Prince Frederick's eldest son, George III. Fredrick Louis's birthday was February 1st. 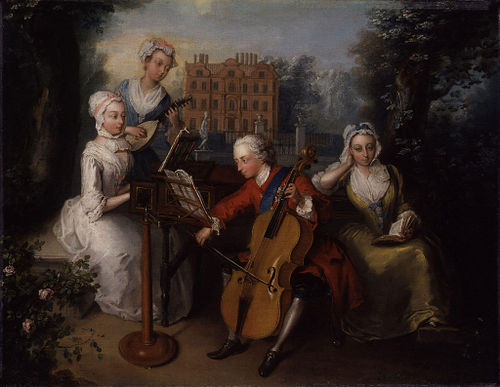 Back to Prince of Wales's Birthday (1)[edit]