Back to Prince of Wales's Birthday (2) (The)[edit]

PRINCE OF WALES’S BIRTHDAY [2], THE. English, Country Dance Tune (cut time). B Flat Major. Standard tuning (fiddle). AABB. Although there was another, earlier, tune of the same name, this melody appears unique to London publishers Charles and Samuel Thompson’s 1757 country dance collection. The Prince of Wales at the time of the Thompson’s publication was George, the son of Frederick, Prince of Wales and Augusta of Saxe-Gotha. George (1738-1820) was created Prince of Wales in London on 20th April 1751, aged 12, and later acceded the English throne as George III on 25th October 1760 (upon the death of his grandfather, King George II). His birthday was June 4th. 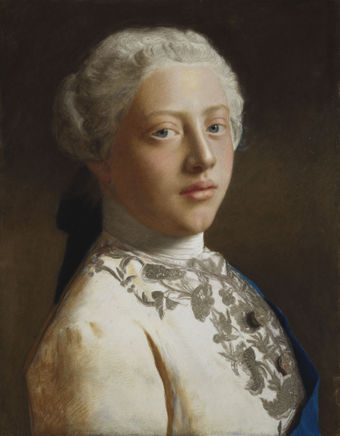 As with several tunes from the Thompsons' collection, "Prince of Wales's Birthday" was entered into the 1788 music manuscript collection of John and William Pitt Turner, of Norwich, Conn. A different, earlier, tune with the title "Prince of Wale's Birthday (1)" was printed in London by John Johnson and by John Walsh.

Back to Prince of Wales's Birthday (2) (The)[edit]