PRINCESS AUGUSTA. Scottish, Air (2/4 time) or Slow Strathspey. D Major. Standard tuning (fiddle). AAB (Gatherer): AABB’ (Gow). Though Niel Gow (1727-1807) did not attach his name to the tune, he was attacked by Robert Burns (in a letter published in 1808) for publishing it "as his own composition" and Burns further angrily declared it to be but a variation of "MacPherson's Farewell." Alburger (1983) finds that the two tunes seemingly have little in common, however. Gatherer credits the composition to Niel's son Nathaniel (without citing his authority, for it is unattributed in his 3rd Collection), who published both his and his father's compositions. 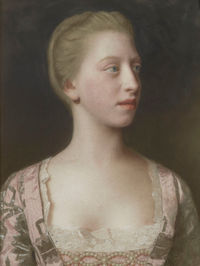 The title may refer to HRH Princess Augusta Frederica [1] (1737–1813), the unhappy elder sister (and only sibling) of King George III and granddaughter of George II. She married the Duke of Brunswick, Karl Wilhelm Ferdinand, in 1764, and was afterwards resident in England only a the end of her life. Alternatively, the title may honor Princess Augusta Sophia [2] (1768-1840), the sixth child and second daughter of George III and Queen Charlotte. She was handsome but painfully shy, and stammered when in front of people she didn't know; but Fanny Burney said she “has a gaiety, a charm about her, that is quite resistless; and much of true, genuine, and very original humour” and that she conversed “with that intelligent animation which marks her character.” 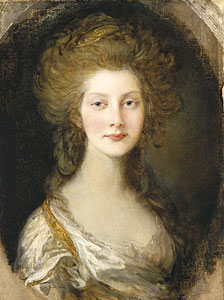 When a fashion for Scottish dancing hit London at the turn of the 18th century, Princess Augusta was in the forefront, as we see in this excerpt from a London paper called The Star (06/01/1799), which reported on a recent ball at Oatlands Palace, Surrey, England:

At the fete given by Her Royal Highness, the Duchess of York, at Oatlands on the 30th of May (1799), the dances were as follows: 1. Ramah Droog. 2. Miss Murray of Auchtertyre. 3. The Tartan Plaidie. 4. Lady Harriet Hope’s Reel. And lastly, the enchanting tune of Miss Gordon [Garden] of Troupe’s Strathspey was called for by Princess Augusta, and danced twice over by all the fet. Between the second and third dance, Their Majesties desiring to see the Highland Reel in all its purity, it was danced by the Marquis of Huntley and the Lady Georgiana Gordon, Colonel Erskine and Lady Charlotte Durham, with all the elastic motion, hereditary character, and boundless variety of the Scottish dance.