Back to Princess Margaret's Fancy

PRINCESS MARGARET'S FANCY. English, Jig. D Major. Standard tuning (fiddle). AABBCCDD. Both a dance and tune composed by Peter Kennedy (1922–2006) in 1949 in honor of Princess Margaret (1930-2002), only sibling of Queen Elizabeth II. She was President of the English Folk Song and Dance Society in the mid-20th century. 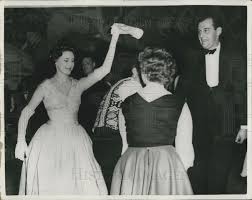 Kennedy, in whose 1951 book the tune appears, reportedly once tried to teach Princess Margaret to play the melodeon.

Back to Princess Margaret's Fancy