Find traditional instrumental music
This is the stable version, checked on 31 August 2020.
Jump to: navigation, search

Back to Professor Blackie 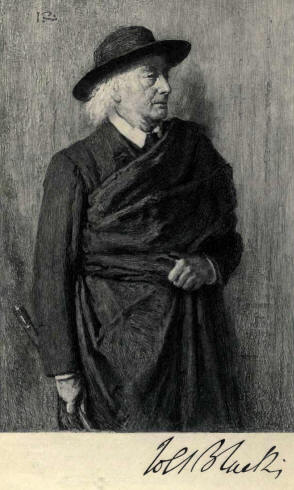 The landlord o' the moon, quoth he.
Auld bricks, let's ha'e a glorious spree,—
Hooch! Lunar blades, why sudna we,
Like earth-born things, be frisky, O!
We'll drink Professor Blackie's health,
An' wish him muckle Gaelic wealth,
An' always get by groat or stealth
The gallant Major's Whisky, O!

'The gallant Major' refers to the dedicatee of the piece, "Major Smith, Minmore."

Professor John Stuart Blackie [1] (1809–1895) held the chair of Latin at Marischal College, and was a noted classicist who started the Hellenic Society in 1850. In his teaching, he broke from Latin recitation and preferred to have his pupils stand up and extemporaneously describe a picture or statue in the language. He was fond on Scottish music, wrote songs himself, and was an admirer of Skinner's work, Blackie wrote to the fiddler-composer from Edinburgh in April, 1888, encouraging Skinner in his work on the Logie Collection, and Skinner had the letter published in a newspaper. It reads, in part:

I am delighted to hear that you are prosecuting vigorously your noble work of giving to the world the Logie collection of Scottish songs, pipe tunes, strathspeys, etc. You could not spend your genius on a task at once more patriotic and more opportune...

Back to Professor Blackie