Find traditional instrumental music
This is the stable version, checked on 25 September 2019.
Jump to: navigation, search

Back to Puddings and Pies

PUDDINGS AND PIES. English, Country Dance Tune and Jig (6/4 time). D Major. Standard tuning (fiddle). AABB. "Puddings and Pies" was first published in London by Henry Playford and appears with dance directions ("Longways for as many as will") in his Dancing Master, 10th edition (1698). The dance and tune were retained in the long-running Dancing Master series of editions through the 18th and final edition of 1728 (published at the time by John Young). 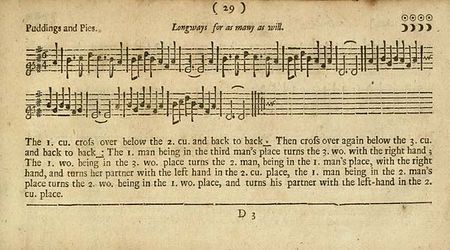 The tune and dance were also published by rival London publisher John Walsh in his The Compleat Country Dancing Master (1718, and later editions of 1731 and 1754). John Gay used the tune in his ballad opera The Beggar's Opera (1729, air 64) as the vehicle for the song "There was an old woman" the first line of the ballad "The Old Puddingpye Woman," first recorded in 1675. London musician Thomas Hammersley entered it into his 1790 music copybook.

Antiquarian William Chappell (A Collection of National English Airs, 1840, p. 176) quotes Stafford Smith in the preface to Musica Antiqua (p. 3), who remarked the a number of early English melodies (including "Puddings and Pies") were "derived from the same source--the Minstrels; and will be found, on examination, to have sprung from the minstrel practice of descanting or singing extempore on the plain chant or plain song of the Church: and some passages of the plain song, as exhibited in the Formula, according to the use of Salisbury, as established in 1077 by Osmund, Bishop of Salisbury, are so evidently the basis to dance tunes still remaining, that there can be little doubt that the melody, or upper part, was formed upon them." Tunes in this category are "Stingo," "Virgin Queen," "Three Sheepskins" and others.

Back to Puddings and Pies