PULASKI GUARDS. American, Reel. B Flat Major. Standard tuning (fiddle). AABB. The Pulaski Guards were formed in Boston in the mid-1830’s and became one of the premier Boston militia groups of the mid-19the century. Headquartered at C Street and Broadway, their first leader was Colonel J.L.C. Amee. A piece of music called “The Pulaski Guards Quick Step” was published in Boston in 1836, composed by one James Hooten, and dedicated to Colonel Amee (see American Memory [1]). Later the unit was part of Colonel Robert Codwin’s 1st Massachusetts Regiment during the American Civil War. The unit often paraded in the years preceding the war, sometimes at Horn Pond, an area of exclusive resorts and hotels that had been opened up by the development of the Middlesex Canal, thus making country excursions to the Woburn area readily accessible to Boston society. Parker L. Converse, in his Legends of Woburn, First Series, records: 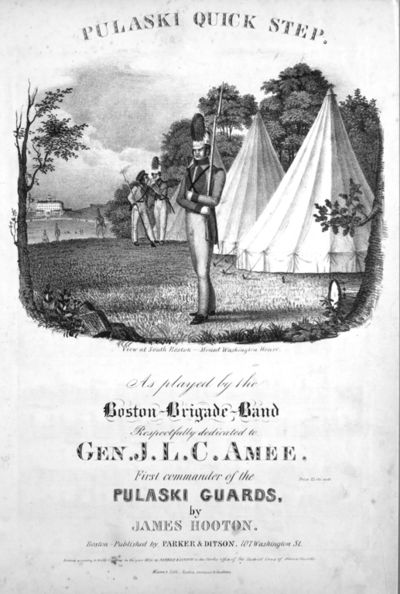 Here in the summer, were numbers of boarders. Parties from Boston and elsewhere came for the day. Balls, parades, water parties, and merry makings succeeded each other in rapid succession. Here came Boston's Military, the Pulaski Guards. New England Guards, the Tigers with their peculiar yell, the Ancient and Honorable Artillery Co., the Charlestown Light Infantry, all crack organizations at the time, with others from a distance. These often encamped on the flat, back of the hotel [the area below Warren Street]. With them came Kendall's Boston Brass Band, and the Brigade Band of Boston, with John Bartlett, the finest cornet player our State has yet produced. Here crowds gathered and listened, spell bound, as the celebrated Ned Kendall, with his gold E-flat bugle….