Pup in the Parachute

Back to Pup in the Parachute[edit]

PUP IN THE PARACHUTE. English, Reel. G Major. Standard tuning (fiddle). AABB. The melody appears in the music manuscript copybooks of H.S.J. Jackson (Wyresdale Lancashire, 1823) and J. Winder (Wyresdale, Lancashire, 1835). The title commemorates the demonstration of French inventor Jean-Pierre Blanchard’s (1753-1809) method of escape from his hot air balloons, an invention that took Europe by storm in the 1780’s. In 1785 Blanchard went aloft with a dog as a passenger along with a parachute (developed by Sébastien Lenormand in France) and succeeded in harnessing the animal to the device, then dropping the dog safely to the ground. Blanchard used the parachute himself in 1793 to escape when his hot air balloon ruptured. 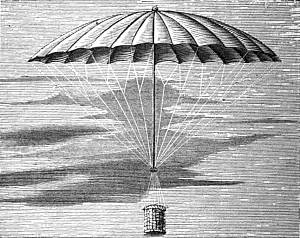 Back to Pup in the Parachute[edit]