PURSUIT [1], THE. English, Country Dance Tune (6/8 time). G Major. Standard tuning (fiddle). ABCA. This 6/8 time melody was heard in the pantomime (an action ballet) The Death of Captain Cook (1789), staged at Covent Garden. It was a verson of Arnould and Audinot's 1788 pantomime La mort du Capitaine Cook à son voyage au Nouveau Monde with music by Jean-Baptiste Rochefort (1746-1819). A 1789 advertisement promoted a Covent Garden Theatre Royal performance of King Richard the Third, "after which will be performed a New Grand Serious Pantomime, in Three Parts, called The Death of Captain Cook. (As now presented in Paris with uncommon applause.) With the Original French Musick. New Dresses, Scenery, Machinery, and Decorations". It was hugely popular in Europe and ran for twenty years in the newly formed United States of America. 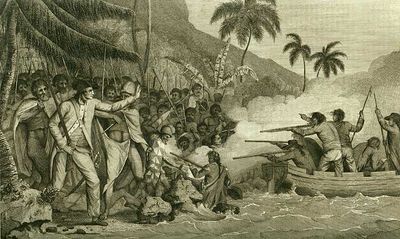 It is tempting to speculate that Northumbrian musician William Vickers' "Cook's Pursuit" is associated with the same pantomime, but his 1770 music manuscript predates both the death of Captain Cook and the pantomime. However, it still may be associated with the Captain, who was already famous in the 1770's for his voyages of discovery.