Put the Gown upon the Bishop

Back to Put the Gown upon the Bishop[edit]

The song "Put the gown upon the Bishop" was printed in James Johnson's Scots Musical Museum, vol. 5 (1797, Song 450, p. 462). Stenhouse, in his commentary on the contents of the Museum, opines: "This is a mere fragment of one of those satirical and frequently obscene old songs, composed in ridicule of the Scottish Bishops, about the period of the Reformation." The first stanza goes:


Jenny Geddes was a real person, whose act of defiance in church caught fire, much as did Rosa Parks refusal to bow to segregation on a mid-20th century bus in the American South. Mark Napier (Memorials and Letters Illustrative of the Live and Times of John , vol. 1, 1859, p. 193) explains: 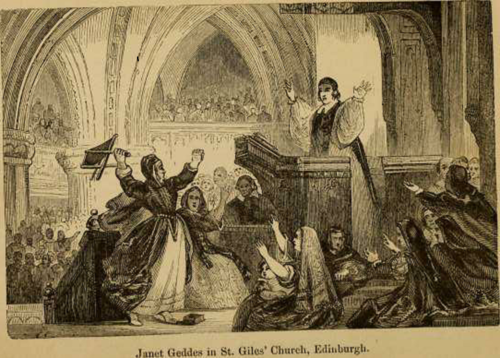 On Sunday the 23d of July 1637, the Dean of Edinburgh had scarcely begun to read the prescribed form of prayer to the congregation assembled in the Church of St. Giles, 'when Margaret Geddes, replete with holy zeal, which her preceding Sabbath's rebuke for fornicatin had doubtless much inflamed, exclaiming, "Out fause lown, wilt thou say the Mass at my lug?"--discharged the stool on which she was sitting, at his head. This pious woman is sometimes named Janet, as in a rude ballad, apparently composed to celebrate her achievement, beginning, "Put the gown upon the Bishop,"--and published in Johnson's Musical Museum. From the continuation of Baker's Chronicle we learn that she survived the Restoration. The tumult began in what is called the Mid Kirk of St. Giles, the East Kirk being then preparing for an altar, and other things which the Lutheran worship requires. From this impetuous Trulla the mob too, the signal of uproar, and, aided by the higher malcontents, proceeded from one gradation of outrage to another, till they brought their King to the block, their country to the verge of destruction, and their national character under stigmas from which it will never perfectly recover.

Back to Put the Gown upon the Bishop[edit]