QUADRILLE MONTCALM (Montcalm's Quadrille). AKA and see "Cuisinière (La)," "Quadrille de Montcalm," "Reel dans la Cuisiniere," "Reel du lac." French-Canadian, Quadrille (2/4 time). F Major. Standard tuning (fiddle). AA'BB'. General Louis-Joseph de Montcalm [1] (1712-1759) was the commander of the French forces in Canada during the Seven Years War. After some initial success in the conflict, he was finally defeated by the British forces under James Wolfe and slain on Quebec's Plains of Abraham [2] in 1859. The Montcolm is also the name of a grand hotel in Quebec, near the site of the battle. 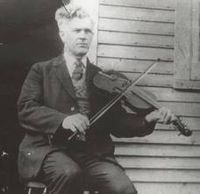