QUADRILLE DES ANCÊTRES (1ère figure). French-Canadian, Quadrille (2/4 time). D Major. Standard tuning (fiddle). AAB. From the repertoire of fiddler Isidore Soucy [1] (1899-1963), who recorded the quadrille set in Montréal in December, 1930. It was issued the following year by Star Records. Soucy, originally from Ste-Blandine (near Rimouski), Quebec, was a renowned fiddler in the mid-20th century, famous for his radio and TV broadcasts, although he retained a rustic playing style. 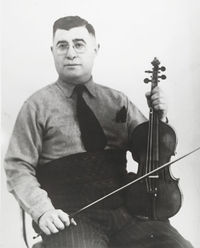