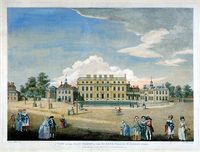 The Queen's Palace began as Arlington House, then, rebuilt from the ground in 1703, as Buckingham House. Early in the reign of George III he purchased the property as a royal residence, thinking it would house his growing family, and it became known as the Queen's Palace. However, both he and Queen Charlotte preferred residences at Kew and Windsor. The structure was enlarged during the Regency of Prince George (later George IV) and became Buckingham Palace.