Back to Queen's Square (The)[edit]

QUEEN’S SQUARE, THE. English, Country Dance Tune (4/4 time). D Major. Standard tuning (fiddle). AABB. “The Queen’s Square” appears as a longways dance (for as many as will) in publisher John Young’s Dancing Master, second volume, third edition [1] (London, 1718) and again in the fourth edition (1728). Young was the heir to John and Henry Playford’s long-running Dancing Master series. "Queen's Square" was also printed by London publisher John Walsh in his The Second Book of the Compleat Country Dancing-Master (1719, p. 298). 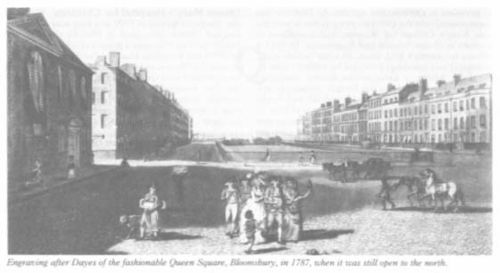 The title perhaps references Queen Square [2], in the Bloomsbury district of the London Borough of Camden, England, originally constructed between 1716 and 1725. There was also a Queen's Square in fashionable Bath, England, but it was constructed from 1728-1736--too late for Young's Dancing Master.

Back to Queen's Square (The)[edit]