QUICK STEP 25th REGIMENT [2]. AKA and see “Ball's Hornpipe,” “March W.S. Royals.” English, March (2/4 time). G Major. Standard tuning (fiddle). AB. Aird dedicated his collection to the “volunteer and defensive bands of Great Britain and Ireland,” a reference to the military units that sprang up in defense of the home islands during the wars with the French. See note for “Ball's Hornpipe” for more. 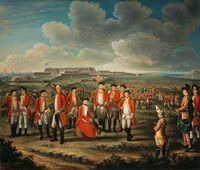 Lady Louisa Lennox with Her Husband’s Regiment, 25th Regiment of Foot (with Lord George Lennox beside her, and Fort St Philip, Port Mahon, in the background) by Giuseppe Chiesa, c. 1769–1771

The 25th Regiment was raised in March, 1689, as The Earl of Leven's or Edinburgh, Regiment of Foot to defend Edinburgh against the Jacobite forces of James II. They saw action in the Battle of Killiecrankie later in 1689, and, although the crown forces were defeated, Leven's brigade fired the volley that killed the Viscount Dundee--Bonny Dundee--and effectively ended James II's attempts to secure his rule. The unit was called by the name of several colonels, and fought the Jacobites again at Culloden in 1746 as Semphill's Regiment of Foot. Between 1782 and 1805 (at the time the march was printed by Aird) it was designated the 25th (Sussex) Regiment of Foot.