Back to Quick Step 2nd Regiment

QUICK STEP 2nd REGIMENT. English, March (2/4 time). G Major. Standard tuning (fiddle). AAB. The 2nd Regiment has had a colorful history in the British Army, under a bewildering variety of names. It was raised in 1661 by Henry Mordaunt, 2nd Earl of Peterborough, and took his name as The Earl of Peterborough's Regiment of Foot. Its purposed at the time was specifically to garrison the new acquisition of Tangier (which English acquired as part of Catherine of Braganza's dowry when she married King Charles II), and so became known as the Tangier Regiment. The regiment modeled its badge after the Paschal Lamb, an image taken from the coat-of-arms of Queen Catherine, which was then associated with the regiment's 'sacred mission to battle the heathen Moors'. 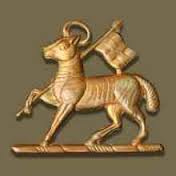 The Paschal Lamb badge of the 2nd

As was the custom of the time, it acquired the name of a succession of commanding colonels, from one of whom, Percy Kirke, it acquired the name 'Kirke's Lambs'. In 1715, it was renamed The Princess of Wales's Own Regiment of Foot after Caroline of Ansbach, then Princess of Wales, and, when she became Queen in 1727, the regiment's title changed to follow suit, becoming The Queen's Own Regiment of Foot. The army reorganized all its units in 1751, giving them number designations, and it became the 2nd (The Queen's Royal) Regiment of Foot, a name retained for more than a century. In music publisher James Aird's time, the 2nd helped put down the anti-Catholic Gordon Riots in London in 1780 and detachments from it fought as marines in the naval battle of the Glorious First of June in 1794.

Back to Quick Step 2nd Regiment