Back to Quick Step 33rd Regiment[edit]

QUICK STEP 33rd REGIMENT. English, March (2/4 time). D Major. Standard tuning (fiddle). AABB. Originally formed in 1702, the unit bore the name of a number of commanding colonels, until, as a result of the army reorganization of 1751, it received the designation of the 33rd Regiment of Foot. "In 1782 the regiment's title was changed to the 33rd (or First Yorkshire West Riding) Regiment, thus formalizing an association with the West Riding of Yorkshire which, even then, had been long established" [1]. 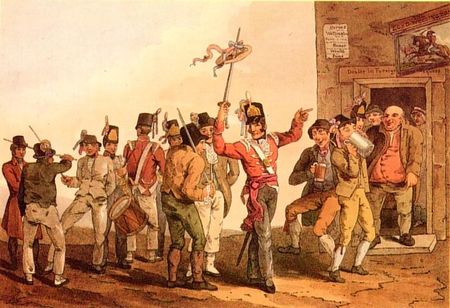 A recruiting party from the 33rd, c. 1814, from the series 'Costumes of Yorkshire'. The sergeant plies locals with beer, and has, impaled and beribboned on his sword, a flat oatcake, a regimental tradition symbolizing the plentiful food promised to the recruits.

During Glasgow music publisher James Aird's era, the 33rd had seen service in America, where they landed at Cape Fear, North Carolina, in 1776. The regiment saw action in many of the major campaigns of the American war, including the New York and Pennsylvania campaigns of 1776-1778, and, later in the war, in the Carolinas and at Yorktown. The 33rd had a reputation for discipline and duty. A non-commissioned officer in another regiment, Sergeant Roger Lamb, remarked in his "Memoir of His Own Life, by R. Lamb; Formerly a Serjeant in the Royal Welch Fuzileers..." (Dublin, 1811):

I am bound to record here that I have felt a certain shamefacedness, on visiting the barracks of the 33rd Regiment, who were commanded by the young Earl of Cornwallis, to compare their high state of appointment and the steadiness of their discipline with the slovenly and relaxed bearing of most of our own companies. One can always correctly judge a regiment by the behaviour of its sentries. I have seen men go on duty in the 9th dead drunk and scarcely able to stand, but with the 33rd the sentry was always alert and alive in attention; when on duty, he was all eye, all ear... During the two hours he remained at this post the sentry continued in constant motion and could not have walked less than seven miles in that time. The 33rd thus set a standard of soldier like duty which made me secretly dissatisfied with the 9th, and which I have never since seen equaled but by a single other regiment [the 23rd Regiment of Foot] which was brigaded with the 33rd under the same Cornwallis in the later campaigns of the American War. [p. 90].

The melody was entered into the 1840 music manuscript collection of multi-instrumentalist John Rook (Waverton, Cumbria) as "Quick March."

Back to Quick Step 33rd Regiment[edit]