Back to Quick Step 40th Regiment

QUICK STEP 40th REGIMENT. English, March (6/8 time). D Major. Standard tuning (fiddle). AABB. The 40th Regiment of Foot was raised not in Britain, but in North America, in 1717, by General Richard Philipps from several independent companies in the Americas. Its was commanded by a succession of colonels who also were the governors of Nova Scotia, and saw service in a number of engagements with Native Americans and the French. In fact, the 40th saw service for some 50 years in North America, before finally being transferred to Britain in 1767. The unit returned to America in 1775, comprised of a motley assortment of Scotch, Irish, English and German soldiers who took part in the Battle Long Island and the Pennsylvania-New Jersey-New York campaigns of 1776-1778, including the battles of Brandywine, Paoli, Germantown, and Monmouth. The 40th was reassigned to the West Indies in 1778 but returned, much depleted by disease, to North America in 1781, and then garrisoned New York City until the end of the war in 1783. 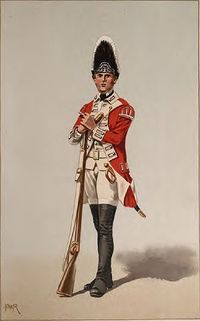 In 1782, when the army was reorganized once more and associated with counties (for recruiting purposes), the regiment took the title of the 40th (2nd Somersetshire) Regiment of Foot.

Back to Quick Step 40th Regiment