Back to Quick Step General Burgoyne[edit]

QUICK STEP GENERAL BURGOYNE. Scottish, Quick Step March (6/8 time). D Major. Standard tuning (fiddle). AABBCCDD. General John "Gentleman Johnny" Burgoyne [1] (1722-1792) fought in the French and Indian Wars in America, and surrendered a British army at Saratoga in October, 1777, during the American War of Independence, which stalled his career as a soldier. However, he had a parallel career as a politician, serving several terms in the House of Commons, and, in the 1780's established himself as a successful London playwright. 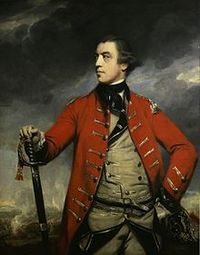 At the time Glasgow publisher James Aird issued his first volume of Selection, Burgoyne's political friends had been restored to office, and he himself was restored to his rank, given a colonelcy and made commander-in-chief in Ireland and a privy councillor.

Back to Quick Step General Burgoyne[edit]