Find traditional instrumental music
This is the stable version, checked on 11 April 2020.
Jump to: navigation, search

Back to Quindaro Hornpipe 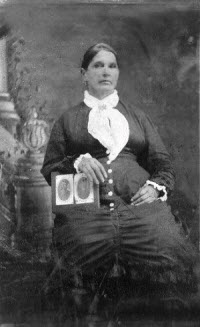 Quindaro Brown was the daughter of Adam Brown, a Chief of the Ohio Wyandot Tribe. In traditional Wyandot, “Quindaro” refers to the leadership role of a first born daughter; it is “also a word that some interpret by the adage ‘In union there is strength.’ At the time of the Wyandot’s forced removal to Kansas in the 1840s, Abelard Guthrie, a U.S. Land Office agent, fell in love with Quindaro Brown and married her. In Kansas, Quindaro was able to convince her tribespeople to sell land to a company for a townsite in present-day Kansas City. The town of Quindaro was the first Free-State port on the Missouri River, an underground railroad site and a temperance town. At the time of its founding in 1856, it was a beacon of hope for anti-slavery advocates in a sea of pro-slavery adherents. The Quindaro townsite was listed on the National Register of Historic Places in 2002. The tune seems to commemorate the town and its namesake. ... [Randy Miller, Monadnock Folklore Society webpage, 2008] [1].

Burchenal prints it as a tune for the dance "Boston Fancy." See also the similar “Douglas Hornpipe.” Seattle musician, entrepreneur and researcher Vivian Williams finds a slightly different version appears under the name "Fanny's Delight (2)" in Saunders School for the Violin (Providence, R.I., 1847). However, the earliest version of the tune is in W. Blackman's A Selection of the Most Favorite Hornpipes for the Violin (London, c. 1810-22), where it appears as "Richard's Hornpipe (1)."

Back to Quindaro Hornpipe