Back to Ranelagh Rant

RANELAGH RANT. English, Country Dance Tune (12/8 time). C Major. Standard tuning (fiddle). AABB. The melody and country dance instructions appear in William Randall's Twenty Four Country Dances for the Year 1771 (No. 20). Randall is advertised as "Successor to the late Mr. Walsh, in Catharine Street in the Strand," and apparently took over the music publishing business of John Walsh after his death. 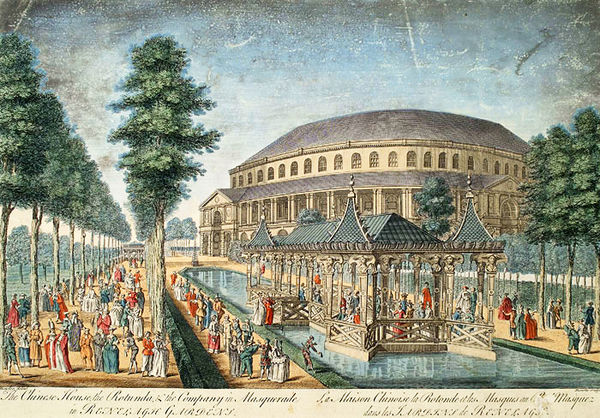 The London pleasure gardens at Ranelagh [1] (pronounced "Ran-lee"), Chelsea, were opened in 1742, and were considered more fashionable (and was more expensive) than its older rival Vauxhall Gardens. The prominent feature of Ranelagh was a magnificent rococo rotunda, designed by William Jones, a surveyor to the East India Company. It was an important venue for musical concerts during the spring and summer seasons. As a concert venue, Ranelagh went into decline after the 1780's, and closed in the first years of the next century. Ranelagh was re-designed by John Gibson in the nineteenth century and in modern times is a green retreat with shady walks.

Back to Ranelagh Rant