RASAY HOUSE. Scottish, Slow Reel. E Major. Standard tuning (fiddle). AAB. Composed by Mr. McLeod of Rasay (Gow, 1817). The present Raasay House, home to Clan MacLeod of the Inner Hebredian Isle of Raasay, west of Skye, was begun in 1746 and is located on heights above the Sound of Raasay looking out to the mountains of Skye. The once-splendid walled garden and house can be seen today, although with an added Georgian style and sandstone frontage added in the 19th century. The structure which preceded it was burned along with nearly every other house on the island after the rebellion of 1745 in punishment for MacLeod support of Bonnie Prince Charlie. 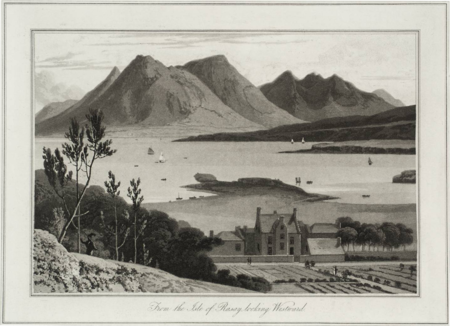 James Boswell and Dr. Samuel Johnson were entertained by the John MacLeod (1714-1786), the 11th Laird of Raasay, at Raasay House in 1773, when, the carpets being rolled back, the portly Johnson was persuaded to dance. He wrote in A Journey to the Western Islands of Scotland (1775):

Our reception exceeded our expectations. We found nothing but civility, elegance, and plenty. After the usual refreshments, and the usual conversation, the evening came upon us. The carpet was then rolled off the floor; the musician was called, and the whole company was invited to dance, nor did ever fairies trip with greater alacrity. The general air of festivity, which predominated in this place, so far remote from all those regions which the mind has been used to contemplate as the mansions of pleasure, struck the imagination with a delightful surprise, analogous to that which is felt at an unexpected emersion from darkness into light.

When it was time to sup, the dance ceased, and six and thirty persons sat down to two tables in the same room. After supper the ladies sung Erse songs, to which I listened as an English audience to an Italian opera, delighted with the sound of words which I did not understand.