A ratcatcher was a one-time profession practiced to keep the population under control to prevent the spread of diseases to man, most notoriously the Black Plague, and to prevent damage to food supplies. One of the most famous was Jack Black, originally from Battersea, England, whose hey-day was in the mid-19th century, one of the subjects of Henry Mayhew's volume London Labour and the London Poor (1851) an early sociological examination of the condition and lives of London’s underclass. Mayhew wrote: 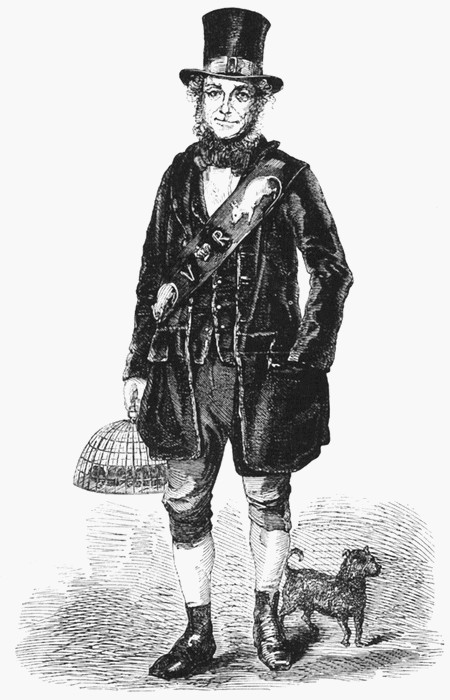 The first time I ever saw Mr. Black was in the streets of London, at the corner of Hartstreet, where he was exhibiting the rapid effects of his rat poison, by placing some of it in the mouth of a living animal. He had a cart then with rats painted on the panels, and at the tailboard, where he stood lecturing; he had a kind of stage rigged up, on which were cages filled with rats, and pills, and poison packages.

Here I saw him dip his hand into this cage of rats and take out as many as he could hold, a feat which generally caused an “oh!” of wonder to escape from the crowd, especially when they observed that his hands were unbitten. Women more particularly shuddered when they beheld him place some half-dozen of the dusty-looking brutes within his shirt next his skin; and men swore the animals had been tamed, as he let them run up his arms like squirrels, and the people gathered round beheld them sitting on his shoulders cleaning their faces with their front-paws, or rising up on their hind legs like little kangaroos, and sniffing about his ears and cheeks.

He breed some of the more unusually-colored rats he caught, domesticated them, and sold them as pets; Beatrix Potter is said to have been one of his customers, buying a rat she call Samuel Whiskers (later the name of one of her books). Queen Victoria as well kept a rat as pet, as did several ladies of the court, keeping them in gilded cages. Black claimed to be the Queen's official rat-catcher, although there is no evidence he ever held a royal warrant. Still, he fancied the part and dressed in scarlet topcoat, waistcoat and breeches, with a large leather sash inset with cast-iron rats, and emblazoned with a crown and the initials "V.R." (for Victoria Regina, the Queen).

Black also bred terriers known to be among the best rat-catching dogs in London.