Back to Rats Quadrilles (Les)--1st Figure[edit] 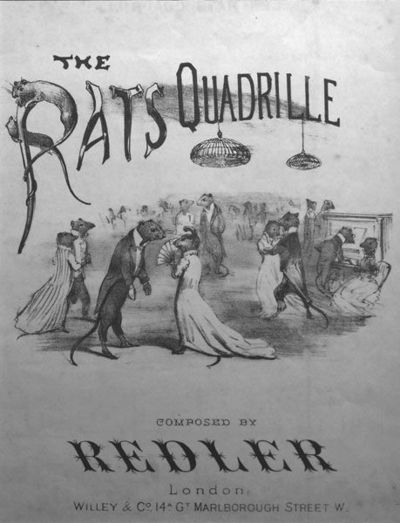 The "Rats Quadrilles" were composed by Gervasius Redler (sometimes the name appears in publications as "J." Redler) around 1844, for the student dancers (les petits rats, or the little rats) of the Paris Opera Ballet. Even today, the students of the Paris Opera Ballet School and some other ballet companies are sometimes called les petits rats [1]. The charming and excellent melodies of Les Rats Quadrilles proved to be enormously popular and were widely published and played internationally and in the English-speaking world in the mid-19th century. Redler's music was for the figures of the first set of French quadrilles. So successful was "Les Rats" that Redler proceeded to compose several sets of quadrilles, all named for animals: Les Chats (cats), Les Souris (mice), Les Singes (monkeys), and Les Chiens (dogs). Redler, who hailed from Alsace (and who as a young man moved to Paris to set up as a piano teacher) also composed other quadrille sets; his "Robert Bruce Quadrille" was built Scottish melodies, and his "Lá Harpe D' Erin" consists "of fricassees of old Irish melodies, more or less happy--less happy when deviating from the originals, and more happy when sticking to them notatim, but never quiete happy altogether" (opined The Musical World). Boston publisher Elias Howe included Redler's "Rats Quadrilles" in his Musician's Omnibus No. 1 (1861) but substituted his own dance figures (reprinted in Howe's American Dancing Master and Ball-Room Prompter, Boston, 1862).

Back to Rats Quadrilles (Les)--1st Figure[edit]