Back to Raymond and Agnes[edit]

RAYMOND AND AGNES. AKA and see "Always Pretty," "None so Pretty (3)." English, Reel (cut time). D Major. Standard tuning (fiddle). AABB. The reel appears as "None so Pretty (3)" in a few country dance publications of the late 1790's and early 1800's, and as "Always Pretty" in Glasgow publisher James Aird's fifth volume of his Selections (1801). The title "Raymond and Agnes," from Preston's country dance collection of 1798 may have been acquired through association with Charles Farley's 'Grand ballet pantomime of action' Raymond and Agnes; or, the Castle of Lindenbergh, staged at the Theatre-Royal, Covent Gardern, in 1797 (music by William Reeve, 1757–1815). It featured the Gothic spectre the "Bleeding Nun," the ghost of Agnes's murdered mother, the former Countess Lindenbergh. 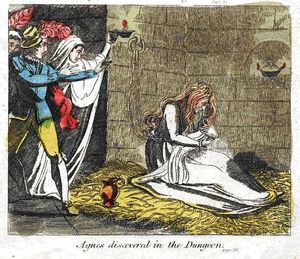 Back to Raymond and Agnes[edit]