Back to Recruiting Sergeant (1)[edit]

RECRUITING SERGEANT [1]. English, Country Dance Tune and Jig (12/8 time). C Major. Standard tuning (fiddle). AABB. Publisher William Randall is advertised as "Successor to the late Mr. Walsh, in Catharine Street in the Strand," and evidently took over the music publishing business of John Walsh, Jr., who himself took over for his father, John Walsh. The Recruiting Serjeant [1] is a burletta by composer Charles Dibdin and playwright Isaac Bickerstaff. It premièred in July, 1770, at Ranelagh Gardens, London. 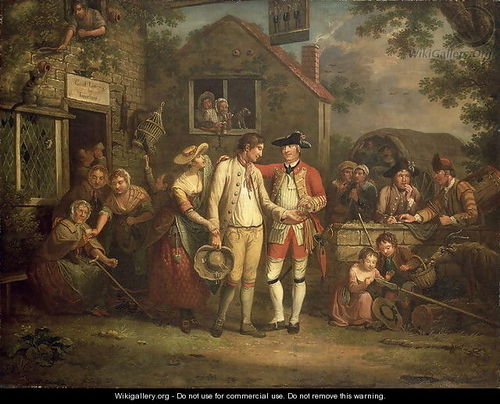 The Recruiting Sergeant by John Collet.

The play was well received and maintained its popularity into the nineteenth century. It was presented in Boston (1799) and in New York (1800) with similar success.

Back to Recruiting Sergeant (1)[edit]