RED LICK. Old-Time, Breakdown. D Major. A “crooked’ tune, having an extra beat at the end of both ‘A’ and ‘B’ parts. The tune was played by Kentucky fiddler Lella Todd [1] (1891-1978), as well as by Billy Stamper, who also lived in the same area. John Harrod, who recorded the tune from older Kentucky musicians in the 1970's, remarked that Red Lick "was known by all the Estill County musicians of an earlier day." Some fiddlers see a resemblance to "Liberty (1)." Lella Todd's version circulated on tape for many years, passed from musician to musician in the days before digital downloads. 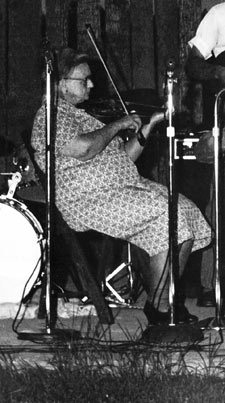 Red Lick is a valley of the Red Lick Stream straddling Madison and Estill counties near Berea, south-central Kentucky, adjacent to the Daniel Boone National Forest.


See also listing at:
Hear field recordings of the tune at the Digital Library of Appalachia; the Kentucky Clodhoppers [2] [3] and Travis Thomas [4]