Back to Red River Jig

RED RIVER JIG (Gigue de la Rivière Rouge). AKA - "Jig Ahtsii Ch'aadzaa." Canadian, Reel, Reel (3/2 time). Canada, Manitoba. A Mixolydian ('A' & 'B' parts) & D Major ('C' part). Standard tuning (fiddle). ABBCC. A dance [1] and tune of the same name very popular in the native American communities in western Canada. It has been called by many the 'Métis national anthem'. The tune is derived from the famous French-Canadian step-dancing tune “Grand Gigue Simple (La)” (AKA – “Jig du Bas-Canada (La)” and “Gigue simple”), and is a Métis fiddling favorite under the “Red River” title. Anne Lederman (in her entry on “Fiddling” in the Encyclopedia of Music in Canada, 1992) states that this tune and its cognates were one of two important step-dance tunes in the repertoire of the 18th and 19th century fur-trade in Canada, along with “Drops of Brandy.” She suggests “Red River Jig” (and cognates) may originally have been Scottish hornpipes in 6/4 time. It has variously been transcribed in 2/8 time, 3/2 and 3/4 time, and is a version of the 'brandy' form (rather than a triple hornpipe). 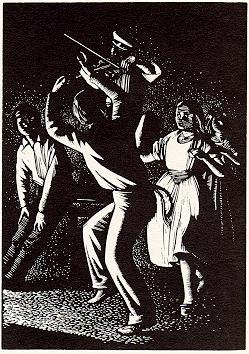 Roy Davis (1980) studied the diffusion of the tune across the Canadian north, and compared ten versions of the tune as played by Métis fiddlers in Alberta and Saskatchewan (sometimes as "Jig Ahtssi Ch'aadzaa", its name in the Gwich'in language, or, in Michif, "oayache mannin"), and ten versions of the tune from Quebec fiddlers (as "Grande Gigue Simple (La)"). Researcher Jean Duval finds one of the earliest recorded versions (if not the very first) to be fiddler Léon Robert Goulet's (1890-1955) 1928 recording of "Red River Jig" for Victor Records. Goulet, who grew up and lived in the Winnipeg area, recorded two sides for Victor that year, with another four sides in 1930, and eventually moved to British Columbia. Duval also discovered a connection with a later recording by fiddler Frédéric Genthon, the maternal uncle of Léon Robert Goulet. Genthon's recording was made in January, 1940, on radio station CJRC of Winnigeg. The tune was recorded for the Library of Congress [AFS 02469] by Alan Lomax in October, 1938, from the playing of Joe Cloud (1885-1965) and Clarence Cloud (1915-2002) of Odanah, Wisconsin. Andy DeJarlis's 1961 recording of the tune has been highly influential and his version much imitated, although DeJarlis's fiddling in general has also come under criticism for his tendency to adapt aboriginal-based melodies into 'square' formats, a la 'down-east' fiddling. Still, his "Red River Jig" is perhaps the most significant version influencing modern repertory.

The Red River of the North flows through Manitoba and the Métis (Native North American) lands and forms the border between North Dakota and Minnesota, flowing northward through Winnipeg, Manitoba, Canada, to Hudson's Bay.

Back to Red River Jig