Find traditional instrumental music
This is the stable version, checked on 22 March 2022.
Jump to: navigation, search

Back to Redowa Polka (The)

REDOWA POLKA, THE. English, Polka (cut time). D Major {Carlin}: G Major ('A' and 'B' parts) & C Major ('C' part) {Barber, Callaghan, Doyle, Trim}. Standard tuning (fiddle). AABB (Carlin): AABBCC (Barber, Callaghan, Doyle, Trim). Redowa [1] is the name of a waltz-like dance movement popular in the nineteenth century, in ¾ time. The dance originated in Bohemia and involved a change of weight that, while appearing graceful to the onlooker, involved a level of skill that could only be brought off by better dancers. Eventually hybrid forms were created—the Polka Redowa and the Redowa Polka. The Polka Redowa was a polka dance set to redowa music in ¾ time; while a Redowa Polka was a redowa dance set to polka music in 2/4 time. 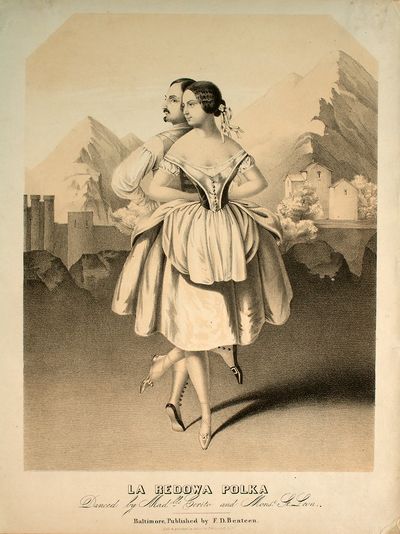 Published versions of the "Redowa Polka" date to the 1850’s [2][3], with the composition being credited to Cesare Pugni [4] (1802–1870), an Italian composer particularly of ballet music; he composed for Her Majesty's Theatre in London (1843–1850) and then for a couple of decades in Russia. Several printings of "Redowa Polka" prominently feature the name of arranger Louis Jullien (1812–1850), a prominent showman, composer, publisher and concert organizer of the mid-19th century. He preformed at Drury Lane and the Zoological Gardens in London, yet in the end squandered his fortune and died a pauper in France.

The second strain of "Redowa Polka" is melodically similar to that of “Girl with the Blue Dress On (1) (The).” Music manuscript versions of the tune can be found in the Thomas Hardy family manuscripts (Dorset, early 19th century) and the Michael Turner manuscript (Warnham, Sussex, 1842–52). In the John Clare manuscript the piece appears under the generic title “Polka” although written in 6/8 time, according to Barry Callaghan (2007). The tune is occasionally heard played at English traditional music sessions today.

See also listing at :
Hear the tune played on youtube.com [5]

Back to Redowa Polka (The)