Back to Reel de Tí-Jean

REEL DE TI-JEAN. AKA and see "Liberty (1)," "Liberty Two-Step" French-Canadian, New England; Reel. D Major. Standard tuning (fiddle). AABB. The tune was recorded in 1955 on 78 RPM by the Montreal-based group Bob Hill and his Canadian Country Boys, a recording that featured the Carignan Brothers (presumably Jean Carignan with twin brothers Marcel and Rodolphe). The title "Reel de Tí-Jean" derives from Jean Carignan's nickname, 'Tí-Jean'. Although the title on the recording was "Reel de Tí-Jean" the tune was known as "Liberty (1)" in America and "Liberty Two-Step" elsewhere in Canada. 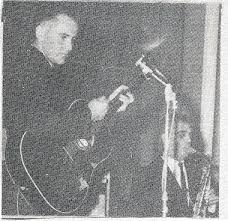 Bob Hill
Robert "Bobby" Hill (1932-2015) was originally from Twin Butte, Alberta, and was a pioneer of Canadian country music on radio, TV and in live performances in the 1950's and 1960's, playing steel guitar and guitar. As well as musical talents, he had intellectual ones as well, and earned a PhD in History from McGill University, Montreal, in 1970, and taught the subject in high school for over thirty years.

It is interesting to compare the recording by Bob Hill and his band with that of (the similarly named Texas fiddler) Bob Wills and his band, from the same era (see "Liberty (1)").

The first strain of "Reel de Tí-Jean" as printed by Miller & Perron (1983) is shared with "Liberty (1)/Liberty Two-Step" however, the second strain differs from those tunes, and differs from Bob Hill's recording.

Back to Reel de Tí-Jean