Find traditional instrumental music
This is the stable version, checked on 24 February 2020.
Jump to: navigation, search

Back to Reel de montagne

REEL DE MONTAGNE (Mountain Reel). French-Canadian, Reel. A Major. Standard tuning (fiddle). AA'BB. "Reel de montagne" (Mountain Reel) is a tune Montreal fiddler Jean Carignan (1916-1988) learned from his teacher, mentor and, later, playing partner Joseph Allard (1873-1947). Although Allard recorded prolifically in the 78RPM era, there is no record that he ever recorded this reel. Instead, it was first recorded by Carignan on a 1976 tribute album of tunes he learned from Allard. 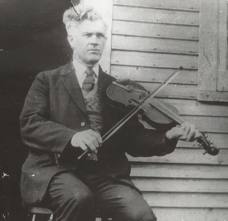 Joseph Allard
Allard did record a "Reel des montagnes" (Reel of the Mountains) in 1929, but is a different reel altogether than the one Carignan recorded. Carignan's tune is known in the Irish tradition, among other names, as "Prohibition (The)" and was recorded by Michael Coleman and Tom Gannon in 1927 (see [1]). 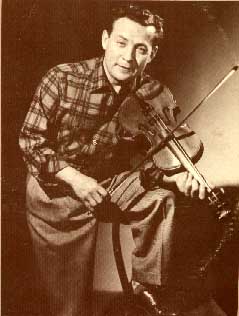 Back to Reel de montagne