Back to Reel du bonhomme[edit]

REEL DU BONHOMME. Frency-Canadian, Reel (cut time). A Mixolydian ('A' part) & D Major ('B' and 'C' parts). Standard tuning (fiddle). AA'BB'CC. Composed by button accordion player Adélard Thomassin (1927-2005), who resided in Sillery, Québec, all his life. He played with L'orchestre de Gilbert Trudel for 38 years beginning in the 1950's, and was also a member of L’ordre du Bon Temps, and Le Groupe sans Âge. Thomassin performed throughout Quebec and internationally in live performances and on radio and TV, and has been lauded as a champion of Quebec traditional music and dance culture. He was honored later in life for his contributions to the tradition. 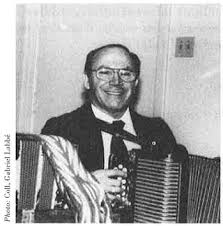 Back to Reel du bonhomme[edit]